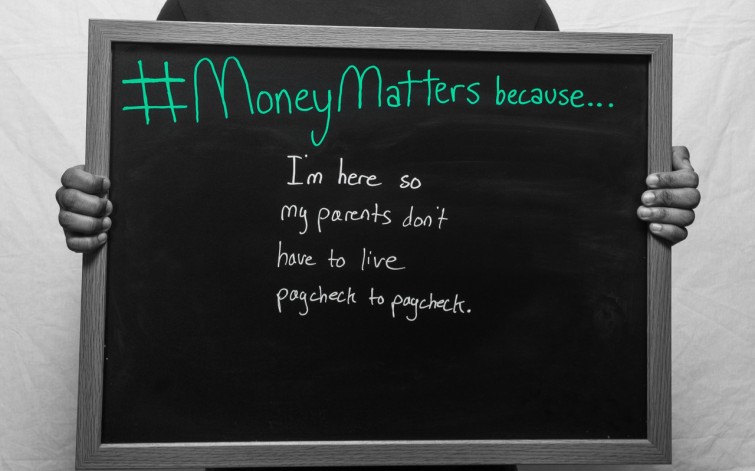 MIT is proud of its socio-economic diversity. We believe in the values of meritocracy, talent and hard work, not financial privilege or pedigree. To ensure that MIT remains a welcoming and hospitable place for students of all income levels, it is important to talk about students' experience of financial challenges and class differences. Talking about financial challenges reduces silence and stigma. Talking about class makes people feel seen, heard, and empowered. Importantly, it makes people of all income levels feel like they belong at MIT.

Below are some personal stories of students and faculty at MIT, who share their experiences.

On sense of Responsibility to Family and Community:

“Coming to MIT, or even just coming to a university, was the dream of generations of my family. It is not just the dream of a lifetime, it’s the dream of multiple lifetimes. I did not want to fail and let my family down.” - First year MIT student from a low-income background, 2018

Excerpt from a 2010 MIT News Article -- Ruben Alonzo, an MIT junior who wants to use his own escape from poverty as a model for improving the lives of at-risk youth through education, has been awarded a 2010 Harry S. Truman Scholarship. Alonzo seeks to use his talent and skills to help address the U.S. high-school dropout crisis and to empower young students to become role models — issues with which he is all too familiar. After he gets his MIT degree, Alonzo plans to serve in Teach for America for two years — preferably returning to the troubled Southwest Texas school system from which he graduated. Eventually, he hopes to pursue a doctorate in educational leadership before returning to the Southwest, where he wants to start a nonprofit that will help improve education. “I made it this far because I had people who believed in me. They believed in me just like I believe in every single young student in America. I am dedicated to bridging the gaps between the academically/economically privileged and the disenfranchised,” Alonzo said. “Change has to start somewhere, and for me it starts back home. It starts in Texas. I am a community servant and a crusader for social change. The Truman Scholarship will open up doors for me to make this change possible.” http://news.mit.edu/2010/truman-scholar

On sense of Belonging in Higher Education versus being an ‘Outsider’:

Describing working-class students’ experiences going to university: “Going to college is like going ‘Across the Great Divide’ from one class to another, going to a place where we are made to feel casual contempt for the [working-class] places my family called home." Barbara Jensen Reading Classes: On Culture and Classism in America

“My mom thought Penn State was the only place we could afford, and didn't believe we would get financial aid: I remember her insisting at one point, "Places like that don't help people like us.” http://uaap.mit.edu/resources-support/first-generation-program/i-am-first-generation/fgp-faculty-teaching-staff-stories/scott-hughes

Raised in the Bedford Stuyvesant neighborhood of Brooklyn, Wilder and his sister were the first in their family to attend college. Wilder was drawn to history as a way of understanding the world, but the idea of "thinking for a living" seemed uncertain to him, and more so to his Mother. “To become a historian and scholar, I had to be able to explain the career to my Mom,” he recalls. Becoming an historian was “way out of my neighborhood," Wilder says. “When my history professors tried to convince me to become a historian, it made me laugh at first. It seemed an exclusive life, far from my model of success.” https://shass.mit.edu/community/wilder

#MoneyMattersbecause...I still worry if my mom and sister will be able to pay the rent or not.

#MoneyMattersbecause my family in Columbia needs me as their financial safety net.

#MoneyMattersbecause I'm here so my parents don't have to live paycheck to paycheck.

#MoneyMattersbecause I am still wondering how I will pay for my flight back home.