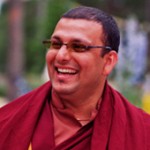 
He studied, trained and was ordained by His Holiness the Dalai Lama. He has been interviewed by the National Public Radio and articles on him and his work have appeared in the New York Times and the Boston Globe. He also speaks at the American Academy of Arts and Sciences and various institutes of learning.

Venerable Tenzin serves on the Board of several academic, humanitarian, and religious organizations. He lectures internationally on subjects ranging from philosophy, science, ethics and religion to socio-political thought.