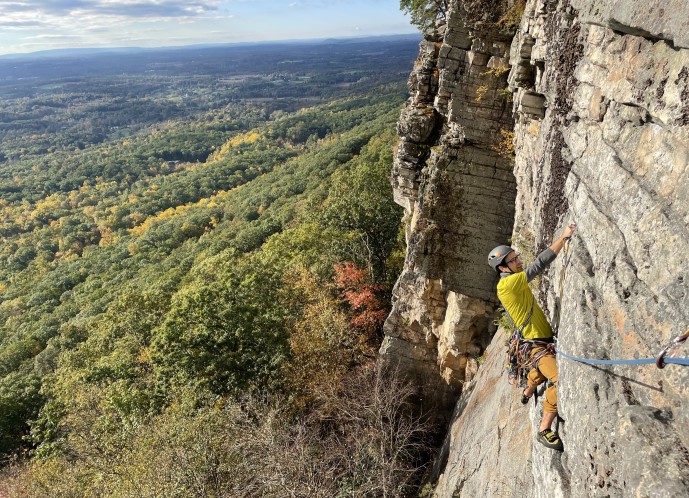 The MIT Outing Club (MITOC) is dedicated to helping the MIT and Cambridge community enjoy the great outdoors. Whether it's hiking, climbing, skiing, biking, camping, backpacking, snow shoeing, or canoeing, think of an outdoor activity and they probably offer it.

MITOC is a network of MIT community members -- students, staff, alumni, faculty -- and even affiliates from other area schools who come together for year-round outdoor recreation in the company of other outdoor recreation enthusiasts. Together, new and longstanding members have the thrilling opportunity to experience some of the highest, widest, most scenic vistas in the New England region.

Serving as one of the group’s largest programs in the warmer months, School of Rock has been running since its inception in 2014. However, MITOCers were rock climbing as early as the 1940s and have pioneered many climbs of the Northeast since the 1950s. “The program is a great way to teach people how to rock climb outside and advance their skills to more complex styles of climbing,” says Nicolas Romeo, a graduate student in the Department of Physics. “It’s a great way for us to foster our climbing community and recruit the next generation of leaders.”

MITOC members travel to their destinations by carpooling to small and large cliffs in the Northeast, known to climbers as ’crags’. Rumney or Cathedral Ledges in New Hampshire, Farley Ledges in central Massachusetts and the Shawangunk Ridge near New Paltz, New York are locations the group often frequent for their daring climbs.

Over the last decade, rock climbing has continued to grow in popularity, especially after sport climbing made its Olympic debut during the 2020 Tokyo Summer Games. Climbing and hiking are MITOC’s core activities, and “climbing has a higher barrier of entry than hiking because of the increased risk and technical skills required to climb safely,” says Cole Crawford, Harvard University affiliate and member of MITOC.

Community safety and wellbeing are top priorities of MITOC. The club has a rigorous leadership selection process that involves a substantial application and recommendation system. Climbing leaders are required to have adequate technical, physical, and interpersonal skills in order to lead specific trips. In addition, climbing leaders have formal first-aid training for certain programs. Participants in climbs organized by MITOC and School of Rock are required to attend a number of mandatory lectures and technical review sessions prior to trips in order to learn skills such as building and cleaning anchors, safe belaying and rappelling, placing gear efficiently, picking appropriate climbs, and more.

Once safety measures are reviewed and in place, community members have the option to participate in two different climbing tracks: the sport track or the traditional climbing track. Beginner climbers typically start off on the sport track, which often involves the use of a rope and where the goal is to take indoor climbers to a stage where they can confidently and safely climb outdoors on permanently bolted sport routes up to 35 meters in length. The traditional track, also known as the “trad track,” is a more advanced version of climbing with the use of a rope, but without using permanent equipment. Trad climbing requires more gear, more rock climbing experience, and is more difficult to get into safely without active mentoring.

The primary goal of MITOC’s School of Rock program is to help people become self-sufficient outdoor climbers. Crawford shared that oftentimes climbing partnerships form and grow organically out of the dedicated time spent together climbing and sharing adventures high on a remote mountain. Alongside the community building aspect of the sport, rock climbing is known to be a great workout that has strong benefits for an individual's mental, physical, emotional, and social wellbeing. Also, there are climbs for every ability level. “It is not just about strength. A large part of the sport is learning how to overcome the fear of falling, deciphering complex sequences of movement, and staying focused through them,” says Romeo. “Math and climbing are really the only things that get my brain to focus like that, and I love it.”

To some members, rock climbing is like solving a puzzle that requires focus. “I love it because it is both a great workout and involves some level of mental engagement that lifting or running or something doesn’t really have,” says Grady Thomas, a sophomore in Electrical Engineering and Computer Science. “The problem solving aspect of it is really fun. It is also a great excuse to get outside and hang out in a pretty place.”

While there can be a number of barriers to outdoor recreation -- money for transportation or gear, lack of experience, or lack of partners -- the School of Rock program tries their best to eliminate these barriers to allow community members to learn how to climb outside safely. “We really just want to get people stoked on climbing outside!” says Crawford.

As the weather turns colder, MITOC is preparing for Winter School, their largest annual event held during MIT’s Independent Activities Period (IAP) and they encourage anyone interested to join them outside in January! 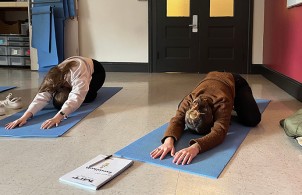 Have you ever dreamed of being a wizard?  Now’s your chance! 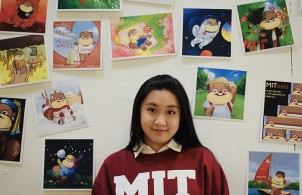 Using art as a bonding enzyme to STEM, culture, and community