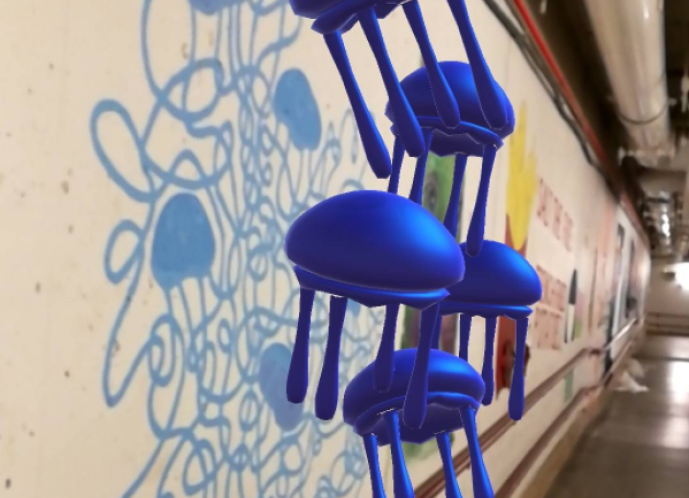 The labyrinthine tunnels of MIT are home to a variety of offices, laboratories, and storage spaces. For some, the tunnels serve as a quick alternative to the oft-crowded Infinite Corridor; to others, they’re a handy way to duck out of bad weather while still making progress toward their destinations. But this May, the tunnel joining Buildings 66 and E17 became home to something new entirely: The Borderline Mural Project. Conceived by Julia Rue ‘18; The Borderline is an installment of twenty-six murals painted on the wall of one of MIT’s busiest underground corridors.

The concept emerged when Rue noticed a lack of an outlet for students passionate about art to pursue that interest in a casual, shared setting. “I just really wanted to do an art piece at MIT that really got the MIT community involved,” she said. “I thought it would be really cool to do a collaborative piece where MIT students who don’t get to do art on a regular basis could [participate].”

From there, she sought out students with a similar passion, and soon, Jessie Wang ‘19, Iris Fung ‘17, Emma DeSoto ‘18, and Tara Lee ‘17 joined the lead team. With approval and funding from the Council for the Arts at MIT (CAMIT), the team took to the tunnel beneath Buildings 66 and E17 to begin painting. Rue cites the pedestrian traffic as a major factor in choosing the location: being the main link between MIT Medical and main campus, community members from all over the Institute frequent the tunnel beneath Ames Street as they go about their day. This link helped inspire the name “Borderline,” according to Rue, but the installment’s title holds several other meanings as well.

“It stands for a bunch of different things,” she explained. “‘Line,’ referring to the pencil line and the action of making marks with art. And ‘borderline’ refers to the border between reality and augmented reality, and art and technology.” At the same time, the title credits not only the art, but the artists themselves. “It shows kind of an inner borderline between people. . .it shows the engineering side, but also their creative side and their ability to go out and try and succeed at different things other than just [their] course major.”

Over the course of several weeks, a team of twenty-four student artists (mostly undergraduates) came together to paint a total of twenty-six murals. The project had no theme, and artists were not selected based on experience: to maintain the project’s goals of accessibility and collaboration, the murals were by anyone and for anyone. While several students came to the project with artistic experience, for many—including DeSoto—the contributions to The Borderline were their first murals. “It was tons of fun,” said DeSoto. “It took a lot of time, but it was really, really fun to do, and really exciting to see how it meshed with everything else.”

And these murals are far from average wall art. Six of the twenty-six paintings feature augmented reality (AR). “Rather than it just being a still 2-D image … it’s kind of interactive,” explained Wang, who developed the BorderlineAR app, which is available for iOS and Android. Using the app, visitors and passerby can view Lee’s Statue of Leafberty, Danny Gelman ‘20’s Abyss, Allan Gelman ‘20’s Cat’s Cradle, Fung’s Flower’s Answer, Ming Wang ‘18’s Girl, and Emma Batson ‘20’s Entanglement through their phones’ cameras, activating digital animations for each. Animations were created either by the student artists or by student volunteers.

Rue added that the app allowed an additional component for audience interaction even after the paintings were complete. “I wanted passersby to be able to interact with the murals as well, [so that] people could pass by and see the progress and feel like they’re kind of a part of it, but also explore it by themselves.”

The installment is set to remain in place until December 2017, but the team has high hopes for the future of similar art projects at MIT. “I think it would be really cool if we got to continue this, or if people started doing this in other places around campus,” said Wang. While they have no concrete plans for expansion yet, the team intends to keep creating art by and for students.

“Student art is art, and it’s well done art,” said Rue. “I really want to continue that or see that live on.” 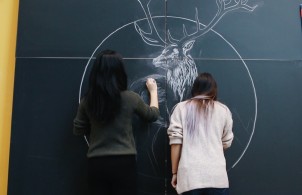 Drawing Daily Doodles: Chalk of the Day Brightens Up Stata

The Ray and Maria Stata Center is an architectural staple of MIT’s campus. 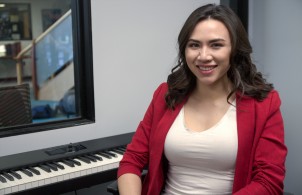 The Chemist and The Stage

Audrey Pillsbury has many different identities on campus: she is a musician and composer, she rows for MIT’s Women Openweight Crew team, and she studies chemistry (course 5).