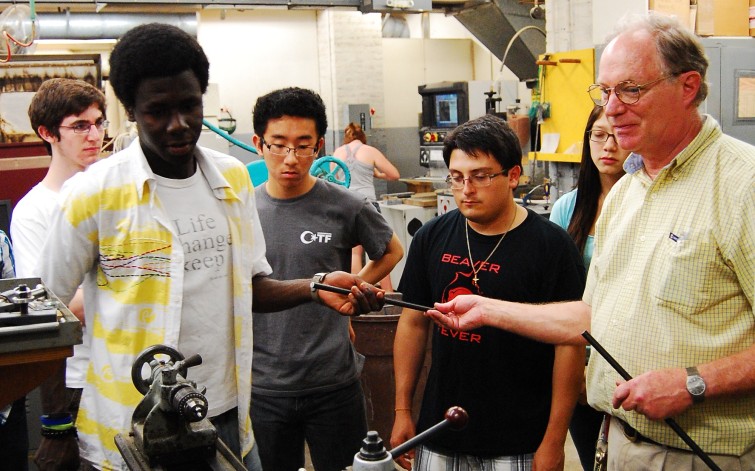 A Short History of the MIT Hobby Shop

The Hobby Shop provides a place for any MIT student, regardless of major or experience, to work with a wide range of well-maintained machines and tools and to receive instruction, as well as practical design and building advice. Projects can be academic or personal, serious or just for fun. The Hobby Shop offers its own classes and collaborates with the faculty in many departments to provide their students with shop facilities and instruction for building projects.

In the 1937-38 academic year, Vannevar Bush, then-Vice President of MIT, granted a group of sixteen MIT students permission to use a room in the basement of Building 2. With equipment they found around the Institute, they set up a wood and metal shop in the sixteen-by-twenty-two-foot area. The club members chose the name “Hobby Shop” based on their belief in the philosophy that the well-rounded individual pursued interests outside their profession—hobbies.

For MIT students, hobbies involved making things, and with their imaginations and talents, a well-equipped shop opened up limitless possibilities. The original Hobby Shop constitution stated that the shop was only to be used by students for non-academic work. The shop operated as a club with a student foreman and members starting as apprentices and progressing to journeymen, and finally, master craftsmen.

During World War II, a staff shop master was hired to instruct students and maintain the machinery. The first shop master, Joe Macalister, worked only until the end of the war when Bob McCadden took over. Starting in his early twenties, Bob remained shop master until he retired in 1972. During this time, the shop expanded several times and finally moved to its current location in the basement of W31, formerly a World War I armory, on the corner of Vassar Street and
Massachusetts Avenue.

Membership was expanded to faculty, staff, alumni, and their spouses. While wood and metal remained, many other hobbies were added, later spinning off as separate clubs—electronics, photography, printing, and throwing pots, to name a few.

By the time I arrived at MIT as a student in 1968, the formal club aspects had been lost. There was no student shop foreman or member classifications given, but the shop was still busy. The printing press had been given to APO and potting was now in Student Art, but there was still a black and white darkroom along with the wood and metal shop. George Pishenin, a technician in Material Science Department and longtime shop member, took over in 1972 as Director. Eventually, the darkroom was removed for space and because Student Art had a better facility.

In 1991, Pishenin retired, and I took over as only the fourth shop master, and the first who was also a MIT graduate. During my time as director, the Hobby Shop expanded its mission to meet the needs of a new generation of students. MIT had many shops when I was a student at MIT, including student shops in all engineering and many science departments. Most of these shops had been closed by 1990, and the ones that remained focused on work for specific classes. At the same time, secondary schools were closing shops and sending fewer students to MIT with hands-on experience.