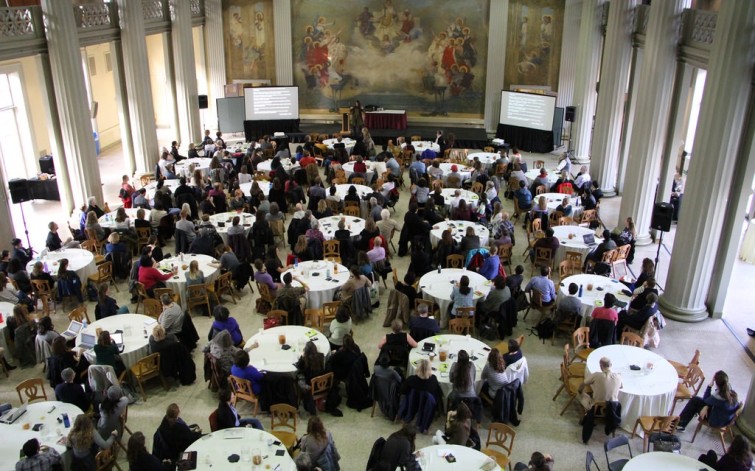 For several years now, the Division of Student Life has sponsored DSL Speaker Series events featuring presenters on issues of special relevance to student affairs and student development. The speakers are drawn from MIT and other universities around the country. Often these events are organized or co-sponsored by other MIT departments, such as the the Insitute Community Equity Office. All are free and open to the public, and typically include a reception afterward with the speaker.

DSL Speaker Series: Donna Hicks, Leading with Dignity: How to Create a Culture that Brings Out the Best in People - October 11, 2018
This talk will be held in Walker Memorial from 2:00-3:00 pm, with a reception afterward. To get free tickets, please register HERE.

Donna will explore the under‑recognized role of dignity in workplace culture. In her new book Leading with Dignity: How to Create a Culture that Brings Out the Best in People, she argues that the extent to which leaders pay attention to, recognize, and understand the dignity concerns underlying people’s grievances makes an enormous difference as to whether leaders can resolve conflicts, have better relationships, and remedy toxic workplace cultures.

Currently an associate at Harvard’s Weatherhead Center for International Affairs, Hicks has worked extensively on international conflict resolution in the Middle East, Sri Lanka, Columbia, Cuba, and Northern Ireland (with Archbishop Desmond Tutu). In her current work, she has found that although dignity is our highest common denominator and plays a critical role in the well-being and health of a workplace culture, most of us – including leaders – know very little about it. Often confused with the concept of “respect,” dignity goes much deeper, and reflects our inherent value and worth. Everyone wants to be treated in a way that shows they matter. Without a working knowledge of dignity, leaders unknowingly fail to honor it in others and unintentionally cause emotional pain, conflict, and distrust – which can ultimately create a toxic work environment.

Hicks draws on ten years of original research and numerous case studies to highlight the three components of leading with dignity: what one must know in order to honor dignity and avoid violating it; what one must do to lead with dignity; and how one can create a culture of dignity in any organization, whether corporate, religious, governmental, healthcare, and beyond.

The Division of Student Life and the Institute Community & Equity Office hosted a talk by Prof. Daniel Jackson, who discussed his recently published Portraits of Resilience on Thursday, March 8 in the MIT Chapel (W15) at 2:00 pm. Prof. Jackson's work is a compilation of personal stories of MIT students, faculty, and staff who have grappled with daunting challenges, and found ways to overcome them and succeed, even in the fast-paced, demanding environment of MIT. There are some remarkable lessons for each of us in these stories, all of which have been published in the MIT newspaper The Tech over the past few years. Immediately after the talk, there was an informal reception with Daniel, as well as an opportunity to purchase copies of the book from the MIT Press. HERE is a photo album of the event.

The spring, 2016 Division of Student Life Speaker Series lecture features Patrick T. Terenzini. The title of his talk is “Missing the Forest for the Trees: Rethinking What Influences Student Success." Terenzini is Distinguished Professor of Higher Education Emeritus at Pennsylvania State University. The event is open to the MIT community on Wednesday, March 30, in La Sala de Puerto Rico in the MIT Student Center (W20). The talk begins at 2:00 pm and is followed by a meet-and-greet at about 3:00 pm.

Terenzini seeks to answer two questions: “What have we learned from more than 6,500 studies published in the past forty-five years on the impacts of college on students?” and “How can we make the best use of that knowledge to promote student success?” In answering those questions, Terenzini summarizes the evidence relating to a wide array of educational outcomes and identifies what he considers the key characteristics of effective educational practice and programs. He then discusses the implications of those findings and characteristics for student affairs and academic administrators and for faculty members in all disciplines.

Prof. Terenzini’s research examines the effects of college on student learning and development, persistence, and educational attainment.  He has been the Principal Investigator (PI) or co-PI on research grants totaling more than $13 million from such organizations as the National Science Foundation, the U.S. Department of Education, the Lumina Foundation for Education, the Sloan Foundation, and the Spencer Foundation.  He is co-author (with Ernest T. Pascarella) of the two-volume How College Affects Students (Jossey-Bass, 1991 and 2005), an award-winning synthesis of more than thirty-five years of research on the impacts of the college experience on students.  The first volume was selected as “one of the one hundred most important and influential books about U.S. colleges and universities published in the twentieth century.”  Terenzini has also published more than 150 articles in refereed journals and made more than 250 presentations at scholarly and professional national and international conferences.

You can find a copy of his slides from the lecture

here
, and the transcript

here
. (We recommend you download the slides and transcript to view, as some browsers may not display them properly)

The winter, 2015 DSL Speaker Series features MIT Professor Sherry Turkle, who shares her recent research on our relationships with technology and observations on how the digital age is affecting our humanity. These are subjects that Prof. Turkle, currently Director of the MIT Initiative on Technology and Self, has been exploring for many years. She has an extensive list of essays and books, including the widely acclaimed "Alone Together" in 2011. She has just released her latest, titled, "Reclaiming Conversation; The Power of Talk in a Digital Age". In a recent review of this book, the New York Times referred to her as "a singular voice in the discourse about technology".

The lecture is Friday, December 4 at 2:00 pm in the 20 Chimneys, 3rd floor MIT Student Center. A meet and greet reception follows afterward, as well as an opportunity to buy her books in the COOP that day. This event is free and open to the public, so you may invite colleagues and friends who are interested in this subject and Prof. Turkle's work.

Here are some photos from the session.

The second Division of Student Life Speaker Series lecture features Dr. Susan Komives. Her topic is “Leadership for the Real World”. The event is open to the MIT community on Wednesday, April 1, at La Sala de Puerto Rico in the MIT Student Center. The talk begins at 2:00pm, followed by a meet and greet at 3:00 pm.

Dr. Komives is a key national figure in the field of higher education and leadership development in an educational setting. The Division of Student Life explicitly employs her Relational Leadership Model in the design of all leadership programs. She is Professor Emerita in the Student Affairs Program at the University of Maryland where she taught until 2012. She has held leadership positions for the Council for the Advancement of Standards in Higher Education, the American College Personnel Association, and is the recipient of a multitude of awards. Dr. Komives has authored twelve books or monograms on leadership and is the founding executive editor of the New Directions for Student Leadership monthly monogram. Her book "Exploring Leadership" is a classic and very familiar to student affairs professionals. During Dr. Komives visit to MIT, Leah Flynn Gallant, DSL Assistant Dean and Director for Student Leadership, has arranged workshops with various groups on campus.

The inaugural Division of Student Life DSL Speaker Series lecture features MIT Professor John Gabrieli, who speaks on “Images of Mind”. Prof. Gabrieli is Director, Gabrieli Lab at MIT’s McGovern Institute for Brain Research. He is a world class researcher, prominent lecturer, and a renowned teacher. One of his courses is the very popular course 9.00 (Intro to Psychology) which attracts over 250 students each year. The DSL Speaker Series presents top professionals like Dr. Gabrieli, who share the research and professional experience relative to education and student development. This event is open to the entire MIT community, so interested friends and colleagues are also welcome.