Reid Weedon ‘41 was a very, very special member of the MIT community. His name may be familiar to many because he helped to found the Independent Residence Development Fund (IRDF) over fifty years ago. He was a very active member of his beloved fraternity, Phi Beta Epsilon. Weedon was also an MIT Corporation life member emeritus, global businessman, inspiring mentor, lifelong sailor and outdoorsman, and outstanding fund raiser for the institutions he loved.

Weedon passed away at his home in Cohasset, Massachusetts on November 2 at the age of 96. He left a lifetime of service to the Institute and the world. Until the last year of his life, he actively volunteered and worked at MIT and kept an office on campus. As Bonny Kellermann ‘72 put it, “One thing is for sure, there will never be another Reid Weedon.”

Weedon’s contributions to the MIT community spread far and wide. MIT President L. Rafael Reif wrote that he doubted “there has been anyone more instrumental than Weedon in building a culture of giving at MIT, and the benefits of this are everywhere around me.” In particular, the members of every one of MIT’s Fraternities, Sororities, and Independent Living Groups (FSILGs) have been direct beneficiaries of one of Weedon’s great legacies, the IRDF.

This Fund has disbursed the following amounts to FSILGs since its founding by Weedon in 1964: 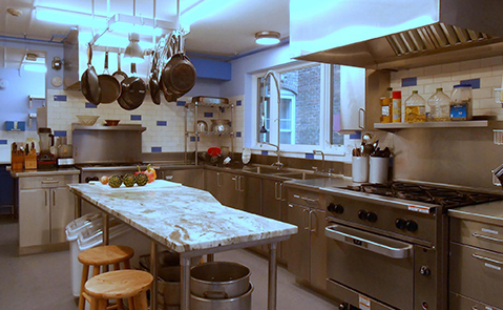 The IRDF has enabled FSILGs to continue to maintain and improve their facilities, and impact others in many different ways. For example, the photo above captures the elegance of the newly remodeled kitchen at the Women’s Independent Living Group (WILG), which was made possible by an IRDF loan. No other university has such a large, comprehensive resource at the disposal of its fraternities and sororities. To mark the fiftieth anniversary of the IRDF, a major celebration was held on April, 26 2014 with Weedon and his wife, Estelle, as guests of honor. A YouTube video captured the spirit of that occasion. 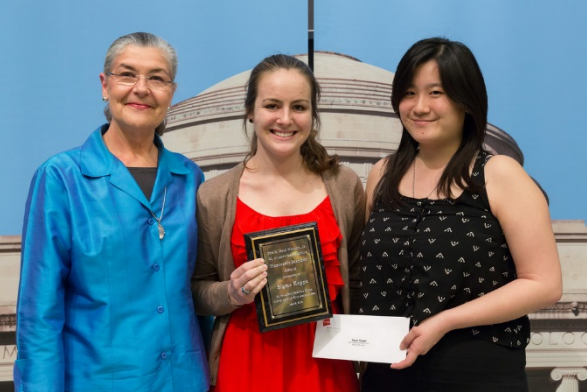 Many in the FSILG community are also familiar with the D. Reid Weedon Jr. ‘41 Award, which Weedon endowed back in 1995 to encourage FSILG student outreach to their alumni. The award has been given annually ever since to up to four FSILGs that have demonstrated the greatest effort in alumni relations for the academic year. The completion is spirited, since first place includes a $7,500 cash prize. Especially to help groups seeking to build their alumni relations programs, this past fall, the Alumni Association developed a companion Weedon Grant program. In the inaugural round, seven FSILGS received grants ranging up to $1000, and henceforth each semester there will be similar rounds of grants. In the photo above, Alumni Association CEO Judy Cole presents one of the Weedon Awards at the MIT Awards Convocation to the officers of Sigma Kappa Sorority.

The MIT Community made sure to honor Weedon through a variety of ways. On Friday, December 2, 2016, several hundred people gathered in the MIT Chapel to celebrate the life of a man whose legacy spreads across every inch of the MIT campus. Stories of Weedon’s life, devotion to MIT, passion for fundraising, and love for sailing were shared by his family and friends. Chapel attendees included President and Mrs. Reif; many MIT Corporation, Alumni Association, and MIT staff members; and alumni and students of Weedon’s beloved fraternity Phi Beta Epsilon. Attendees outside of the MIT contingentincluded members of the Manomet Foundation and the Museum of Science, and of course, his cherished wife Estelle, his children, and a large group of family members. An MIT video captured the chapel service.

From the chapel, MIT provided two large buses to transport the group to the Phi Beta Epsilon house several blocks away. Weedon's fraternity brothers put on a warm reception, including a wonderful spread of fruit, sandwiches, desserts, and plenty of his favorite dark chocolate. The brothers offered tours of their magnificent house, which had a recent $7 million renovation in large part due to Weedon's help. There was a brief ceremony honoring his contributions to the fraternity and the larger community. Fraternity brothers Roy Russell ‘77, Steve Carhart ’70, and Bob Ferrara ’67 each spoke about Weedon's impact. They presented his wife, Estelle, with a framed picture of Weedon, which was signed by dozens of his MIT friends and admirers, and framed by the MIT Hobby Shop. Estelle loved the portrait and insisted it be hung in the fraternity house so that brothers who come after may better appreciate his legacy. The fraternity renamed the new tool-filled makerspace on the second floor the D. Reid Weedon ’41 Makerspace, and that is where his poster now resides.

Weedon was a tireless fundraiser who volunteered his time to MIT and served in almost every leadership position at the Institution. He was a member of the MIT Corporation, president of the MIT Alumni Association, an energetic force in every MIT capital campaign, and a mentor to a generation of fundraisers who remained devoted to him. On fundraising, he felt that “a lot of difficult jobs can be made easy just by tackling them.”

Weedon received his BS in general engineering at MIT in 1941 before serving in the U.S. Navy during World War II. Shortly after the war, he joined the international consulting firm Arthur D. Little (ADL), retiring as senior vice president after more than fifty years. Most notable of his work for ADL, and most meaningful to him, was monitoring the “Sullivan Principles.” Set forth by the Reverend Leon Sullivan, these principles for U.S. companies doing business in South Africa sought to end South Africa’s economic isolation and, ultimately, apartheid. This work lasted seventeen years until South Africa approved the reform process and held its first democratic elections in 1994. Weedon's final visit, of more than twenty-one trips to that country, came just after Nelson Mandela was released from prison.

The FSILG community is grateful for Weedon for all he has done for MIT, and how his legacy continues to contribute in both tangible and intangible ways, even after his passing. He was the product of an age, and “there will never be another Reid Weedon.”

For the November 16, 2016 MIT News obituary, please visit their website.